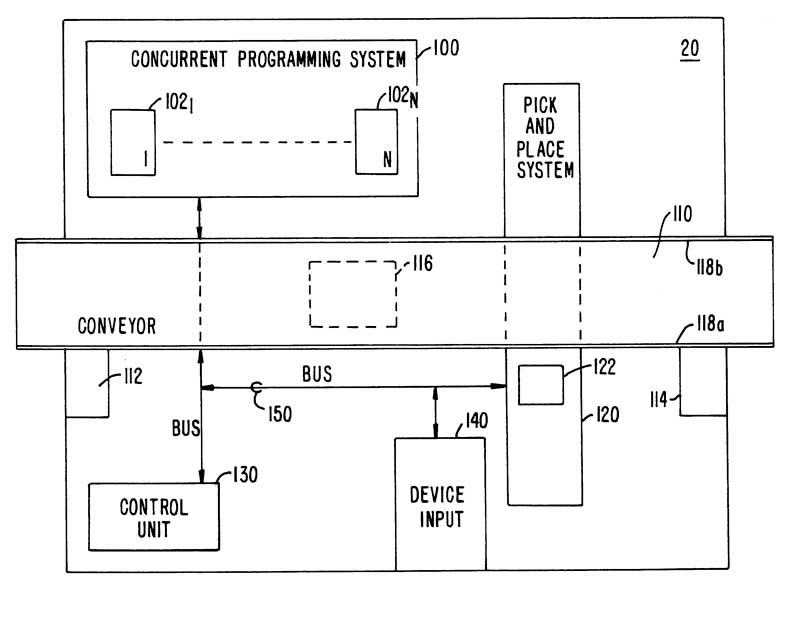 CROSS-REFERENCES TO RELATED APPLICATIONS
This application is related to U.S. Provisional Patent Application Ser. No. 60/117,873, filed Jan. 29, 1999, entitled “IN-LINE PROGRAMMING DEVICE WITH SELF-TEACHING CAPABILITY,” the disclosure of which is hereby incorporated by reference in its entirety.

In the semiconductor industry, a considerable number of electronic devices such as programmable integrated circuit (PIC) devices are provided by vendors in the programmable form with blank memories or unspecified connections between arrays of logic. Users can then custom configure or program the electronic devices to perform their intended function by programming them, transferring or “burning in” a sequence of operating codes into the memory, or by specifying a particular arrangement of gating logic connections.

For years, PICs have been programmed before being assembled onto a printed circuit board using a methodology called off-line programming (OLP). This, however, created some problems in that OLP of the PICs has to be performed prior to assembly. Specialized equipment must also be obtained to perform OLP. Further, OLP has to be scheduled, which may delay the manufacture of PCBAs and create scheduling problems and bottlenecks in the process. Moreover, once the PICs are programmed, they must be stored until the assembly process begins. This storage and related delay typically create an inventory of programmed PICs. Not only does this inventory cost money, but in the event that a pattern change is required immediately, the inventory of programmed PICs may have to be destroyed, which adds to the cost and creates an additional delay before the assembly of more PCBAs can commence.

However, new problems arose. For example, because it is not feasible to program all PICs in-circuit, the designers of the PCBA must choose only devices that are ICP compatible. ICP compatible PICs cost more than similar non-ICP compatible PICs in many cases, so the cost of the PCBA may be higher when using ICP. Additionally, the PCBA design may be more complex to accommodate ICP, so the time to market may be negatively impacted. Furthermore, specialized equipment is required, and software must be written, perform the programming operation, which also may impact time to market for the PCBA. Since the programming operation may take a number of minutes to perform, a production line may be slowed down waiting for programming to complete. To address this throughput problem, some users may set up several ICP programming stations to service a single PCBA assembly line. However, this solution requires additional equipment, floor space in the factory, and capital outlay. Additionally, if the application for the PCBA requires that the PICs be programmed with individualized patterns, it may be necessary to match the individual PICs with their corresponding individual PCBAs. This additional complication adds additional cost and complexity to the assembly operation. Finally, in the event that the PIC fails to program, the entire PCBA will have to be reworked to replace the PIC.