What is the Best Way to Get Devices Programmed?

There are lots of ways to get your data on devices, and there’s no one way that is always better than another. Options that are available today:

So which programming method is best in your specific application? 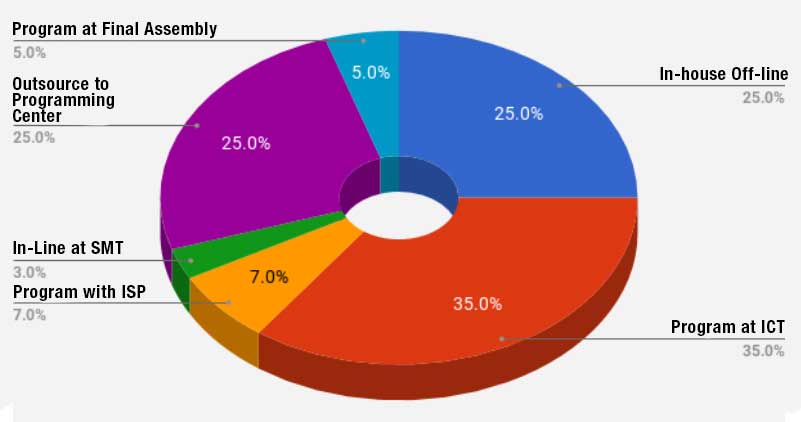 Just as an example, automotive OEMs use a variety of methods to get the job done. There’s an advantage to programming at the In-Circuit Test (ICT) where all of the components are already soldered on the board. By doing programming and testing in one step, you can combine several steps and save a lot of time. This only works when the programming time is very low (less than a few seconds); if not, you could end up with a huge bottleneck, and in the event of an error you likely have to scrap the whole board or remove and re-solder the bad device and do it all again. 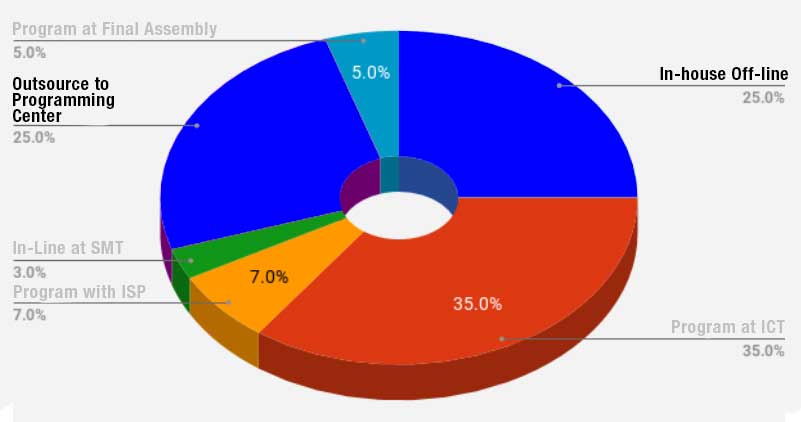 Consider this: the majority of devices programmed for automotive applications are done off-line (50%). Both in-house off-line and outsourcing to a programming house are programmed on the same equipment using off-line automated programming systems, such as BPM’s 4910. 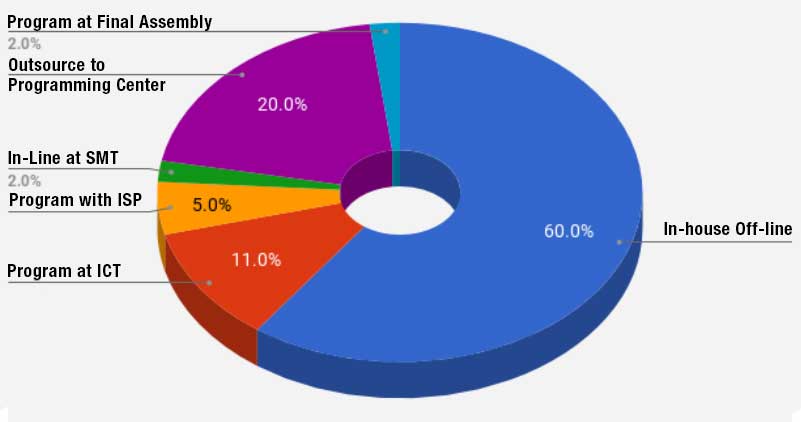 This chart factors data density. When programming times are in excess of the beat rate (beat rate is the total throughput on an SMT line) on the SMT line, off-line programming accounts for 80% (in-house off-line + outsourced at programming house). As data density, device complexity, and the number of devices in each car continues to increase, the need to reduce the cost of programming will be amplified like never before. In-system, in-circuit, and In-line programming become less cost- and time-effective.

With off-line programming, the output can pace with the production line by adding shifts and/or adding machines in combination with strategic outsourcing. In-house off-line programming will continue to grow by providing unmatched efficiencies, producing a lower cost per device, and drastically lowering the lead-times necessary when you out-source. In addition, the software can be updated more frequently, allowing the line to have the latest revision of the source code. And from an intellectual property (IP) perspective, keeping your source code in-house makes your intellectual investment more secure from theft. (IP Theft: See 2018 Bloomberg article )

This is where we can help. BPM’s team can collect the specifications for your project and do a thorough analysis (benchmarks, ROI) and give recommendations. We’ll guide you to ask the right questions. We’re not always the best option, and if that’s the case, we’ll let you know. When you factor in quality, ease-of-use, throughput, cost-per-device, and long shelf-life (some of our machines are still producing after 10+ years), BPM should be part of the conversation.

Surface-mount technology (SMT) is a method for producing electronic circuits in which the components are mounted or placed directly onto the surface of printed circuit boards (PCBs). An electronic device so made is called a surface-mount device (SMD).

In-system programming (ISP), also called in-circuit serial programming (ICSP), is the ability of devices to be programmed while installed in a complete system. The primary advantage of this feature is that it allows manufacturers of electronic devices to integrate programming and testing into a single production phase, and save money, rather than requiring a separate programming stage prior to assembling the system.