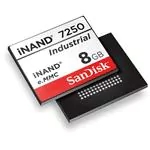 SanDisk SDINBDG4-8G is an 8GB iNAND Flash Storage device primarily for connected and autonomous cars. Western Digital, the maker of SanDisk, describes this family of flash devices: “Leveraging enhanced flash storage technology for superior reliability, the new iNAND storage devices are designed to support data demands of the latest Advanced Driver Assistance Systems (ADAS). These include cutting-edge infotainment, navigation, HD mapping, V2V/V2I communication, drive event recorders, and autonomous driving. The iNAND EFDs (Embedded Flash Drives) delivers dependable performance even in the most extreme environmental conditions, including ambient temperatures ranging from -40°C to 105°C. Western Digital’s robust iNAND embedded flash drives are ideal for a wide range of connected automotive systems and environments. All of our automotive solutions are AEC-Q100 qualified and are designed to meet the reliability requirements of the automotive industry.” 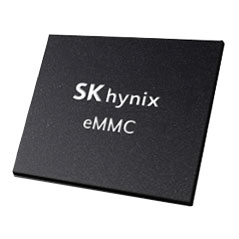 Hynix Semiconductor H26M41208HPRQ is an 8GB eMMC device in a standard FBGA153 package.  The “Q” version is specifically designed for Automotive applications requiring greater temperature ranges. Hynix describes their eMMC 5.1 device family as a “wide-ranging lineup with longevity of support.” It delivers optimized performance with a maximum interface speed of 400MB per second.

While BPM has supported both of these devices in the past, HS400 enables programming eMMC devices at greater speeds (up to 400MB/Second) with improved throughput. From our research, we found other device programming companies also (mostly) support these devices, but they don’t mention HS400, so it’s safe to say they don’t support it. 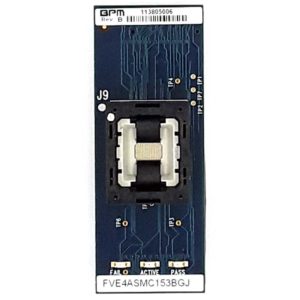 The two socket cards specified (FVE4ASMC153BGJ [available to purchase on the web**] & FVE4ASMC153BGZ) both have compression-mounted sockets. This means when the socket wears out, simply remove it and replace it with LSOCB169KA-3-MOD, rather than replacing the whole socket card (adapter). Both BPM sockets allow for up to 4 devices to be programmed in parallel and will work with both manual and automated systems. In contrast, Elnec’s socket solution is only one-up per programmer, it doesn’t utilize HS400, and they don’t have an automated solution.

In order to fully take advantage of new device support from BPM Microsystems, you’ll need the latest version of BPWin, BPM’s process software. All engineering manual programmers (they start with a “1” such as the 1710) come with lifetime software support. New programmers come with one year of software support; if your software contract has lapsed, please contact Inside Sales to take advantage of daily additions and improvements in device support.

*FVE4ASMC153BGZ uses a newer board design optimized for HS400; allows for even cleaner waveforms, with higher potential yields
**FVE4ASMC153BGJ is available for purchase online in the US, Mexico and Canada

BPM Microsystems has ownership of all designs, manufacturing, and support for all programming sites, robotics, vision systems, and software, so we can provide unmatched support and responsiveness

Manual Programmers for this Device

In stock (can be backordered)